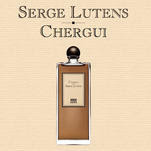 "The perfume Chergui, which has been available exclusively from the Shiseido Palais Royal Salons in Paris since 2001, will be launched more generally in 2009 on both the French and the international markets. After Ambre Sultan and Fleurs d’Oranger, Chergui is the third exclusive scent to join the prestigious ‘Collection des Parfums Serge Lutens’. 1.7 oz., 79 euros".
Available wherever the Lutens export range is sold. 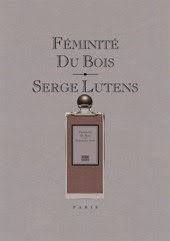 The old trusty standby Féminité du Bois, overseen by Serge Lutens and composed by Chris Sheldrake for Shiseido in 1992, was getting truly scarce on counters stateside (where it was pulled from in 2002)especially in the Eau de Parfum concentration (there is also an Eau Timide). Its mysterious, fruity-incense-y cedarwood laced with spice was the basis on which the Bois series of the Salons de Palais Royal by Shiseido began, offering four variations on the theme: Bois de Violette, Bois et fruits, Bois et musc and Bois oriental. Its scarcity had been lamented by many.
Féminité du Bois now joins the export line in the same oblong bottles of 50ml/1.7oz and will be available at the places that regularly stock the Lutens line at corresponding prices. This is not strange as the American market is second to France in consuming Lutens products (Italy is following suit).
Seeing as Féminité du Bois is still available in Europe in its curvaceous purple-brown bottle, it is left to be settled whether that edition will be pulled making the old bottles rare collectibles or whether the export oblong bottles are mainly destined for the American market. Usually such relaunches mean either reformulation or a licencing disrupture with the previous distributor. We will see soon enough.
The new bottle version is available at Senteurs d'Ailleurs for 80 euros.