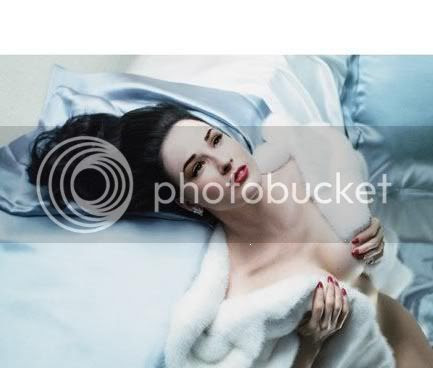 Intriguing as the "article" at the very back of the latest catalog of the luxury store of Neimans is, it entices the reader with a little story that is supposedly recounting the writer's experience with Tom Ford's Black Orchid. After having put this on, the author's husband glances up sharply at her as she enters the room. She smells "like another woman, but in a good way", he proclaims. She quips "goodness has nothing to do with it". We read her inward monologue questioning what woman would dare wear something with vanilla, incense and tonka in the daytime. As though the notes in Black Orchid are suppossed to be trully forbidden, behind wraps, stricly for special occassions only. The story reads like a documented real-life experience which is lovely and misleading at the same time. But with Tom Ford's genius in marketing (alas, not in designing) we shouldn't have expected any less.
The advertising image of the perfume capitalizes on the arresting young looks of Julia Restoin Roitfield, daughter of French Vogue editrix Carine Roitfield, made up in red lipstick glamour and smokey bedroom eyes on a canvas of pale flawless skin, posing like a Hurrell dame of the classic era of Old Hollywood.

Tom Ford explained his artistic vision for Black Orchid thus: “For the last decade, I think we've launched fragrances which, like everything, have become so stripped-down, so transparent in terms of color and often in terms of scent. They often become quite watered-down…everything is tested and retested, and while you might end up with a lot of fragrances, which smell good, it's not fragrance development in the old-fashioned sense. I really wanted to create old-fashioned, but in a new sense. For me to put a story back into fragrance and put the fragrance into a beautifully designed bottle and shoot it in a very lush way, this is a reaction to a decade of minimalism that has left people starved for content and substance,” Mr. Ford said. “I wanted a potent product.”

Tom Ford has been also known to proclaim that "I don't believe in the customer telling you what they want. I think you tell the customer what they need." So by that token when he says the perfume is a black orchid scent, it will smell black as a raven's back. If he says we are smelling an extra rare orchid, this is the offering we are smelling! But contrary to all the laborate publicity of Black Orchid being based on a unique hybrid demanded by the designer and it being one of all four in the world, there are other black orchid scents in perfumery, in name if nothing more, such as those of Susanne Lang most notably (which is subtly seductive, vanillic and very wearable) or Jovan. Even Opium flirted with the idea of being called Black Orchid at one point, but luckily it didn't succumb. There are several species of black orchids as well. The comic strip of Brenda Starr and Basil St.John comes to mind in their pursue of the rare tropical black orchid in the rainforest.

Tom Ford has been responsible for some good perfumes along the way, and also for some not so good. This is of course human and completely understandable. For every Gucci EDP which is a gloved hand in suede dipped in brown sugar there is the slightly plastic wrapping of white muguets of Envy. We can also witness the dichotomy in the case of the incredibly original and innovative M7 as opposed to Rush which is however quite pleasurable, if a little already done (Feu d'Issey?) and a tad loud. The destructive process of reformulating Rive Gauche? I am not 100% sure it can be laid on his doorstep, so we won't take Tom's head for that....yet....
Nu was his most eminent creation for women in my opinion and to this day I am baffled on why it did not prove to be the huge bestseller it deserved to be. Youth Dew Amber Nude , his first effort for Estée Lauder, was a really nice take on a modern oriental that can be worn effortlessly by young thangs, instead of their grandmas, as was the established take on the historic Lauder classic. The Azurée Body Oil that launched this past summer had the irritating aspect of being based on an already established name -although it was a pleasant woody tropical smell- which makes some people anxious whether the original will be sustituted with the new offering, scheduled to appear in summer 2007.
After such a career in scents Tom Ford decided to launch his own. Tom Ford is backed by Estée Lauder but Black Orchid is launching under his own brand name. The reputation of Ford for brash displays of vulgar misogynistic displays of sexuality never materialised in this one, I am happy to report. 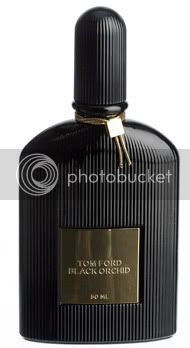 Tom Ford's Black Orchid, developed by the Givaudan company, is to me a cross of JM Pomegranate Noir 's dark fruit (also backed by Estée Lauder, hmmm) and CK Euphoria (which is a recent best-selling juice by Carlos Benaïm with Dominique Ropion and Loc Dong). Don't know if that's intentional or not.
The first delicious couple of minutes Black Orchid also has a potent bitter chocolate note in there mingled with patchouli that is perhaps a nod to SL Borneo, but it soon passes. The top notes are trully hypnotic - they are rich and also a little edgy in their darkness, with something you can't quite put your finger on, more like base notes than a traditional top of fleeting disposition; which makes for repeated applications to try to determine what this is. Alas, they do not last. That's too bad, because it is very very interesting and delicious while it does. Some slight decay and repulsion do contribute to something smelling interesting, and the technique of shocking the customer goes against the grain of the latest happy fruity florals that hit the nose with their burst of tonic top notes, only to vanish in boring predictability a couple of minutes later. At least here there is some shock value, some desire to break the mould.
The drydown is not bad either, it's indeed a nuzzling vanilla scent with some coconut of all things (but not sickly, tastefully and subtly done) and wood, quite nice, if not earth-shattering. In fact the drydown is the most conventional part of the scent.
I don't get enough incence despite the official notes and it is not especially reminiscent of Nu, Ford's scent for women while he was artistic director at YSL, at least in Eau de parfum (which is my preferred formula), as the latter is much more spicy and ambery/incensy; despite the fact that they both contain orchid and incense in their core.

Although the name is both cheesy and alluding to the darkness fit for a really calculating woman, the overall effect was not that dangerous, fangled, clawed potion of sin that it is purpoted to be. It is rather tame.
“Black Orchid is a heavy statement in name, packaging and scent, and it goes against the grain of the flaunting sexiness you expect from him,” said Allan Mottus, the editor of The Informationist, a cosmetics trade magazine. “But he may be clever going for that mature, dramatic type woman who has enormous wealth, is not into hip-hop, and has an appetite for Garbo-ish, Grand Hotel type beauty statements".
After nearly a decade of fruity florals, I think the market is hungry for such a beast, even if I am not probably getting a bottle anytime soon. The fact that Black Orchid is not the masterpiece that could be is neither here nor there, however. It is worth sampling for what it may herald.

Pic of Dita von Teese comes from dita.net, pic of the bottle from NYtimes
*Share with link: Friday, November 17, 2006